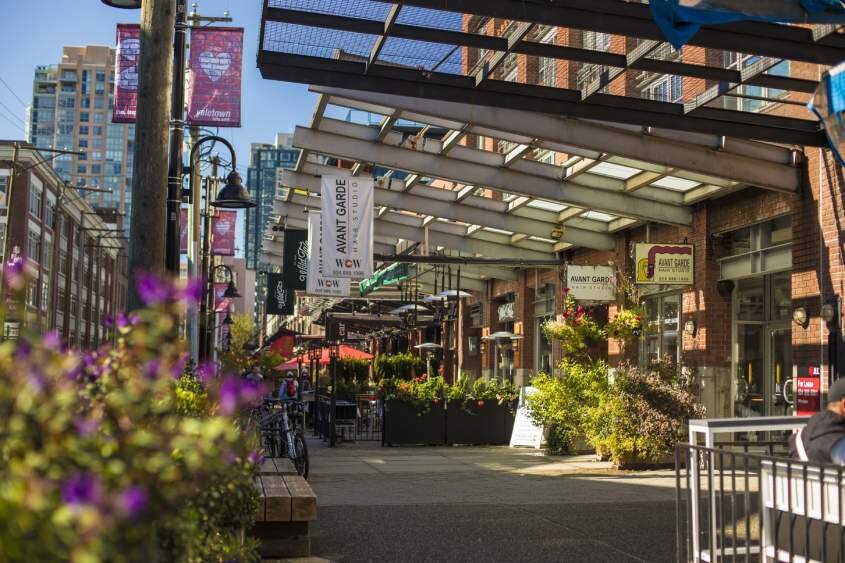 What is it known and loved for?

Yaletown is a residential tower community in Vancouver that was built up mostly during the early to mid-2000’s. Yaletown offers a lot in the way of amenities and conveniences. There are many restaurants and eateries, ranging from casual and convenient to high-end dining experiences. There are parks, gyms, and grocery options. There is local shopping, but the area’s perimeter is also very close to Pacific Centre, Nordstrom, and the beginning of the Robson shopping district.

Yaletown real estate most commonly adheres to one model: a residential tower approximately 30-35 storeys that tends to be both a little ‘cookie-cutter’ from a design perspective, but also quite functional given the boxy designs of both the buildings and the suites inside. Most buildings offer amenities such as a gym and a shared outdoor area, and most of the condo suites offer the modern-day conveniences one would expect: in-suite laundry, patio, parking, storage locker, and most offer pleasant outlooks or views given how the City of Vancouver emphasizes view corridors between towers.

At the core of Yaletown are Homer, Hamilton, and Mainland streets. These streets represent the entertainment district of Yaletown. Most of the neighbourhood’s best restaurants and retail are located here. The buildings in this area are primarily warehouse conversions. Above the retail spaces are sexy loft spaces, and some cool office spaces housing many small-to-medium-size tech companies.

Young, busy, an emphasis on health and beauty, some young families, many singles and couples with dogs, casual in style.

The most commonly noted downside to Yaletown’s real estate is that it can lack character from a design perspective. Also, the vast majority of the towers were not constructed with air conditioning. Given where prices in Yaletown have gone, many of the upscale buyers find this challenging. And it is consistently noted there is at times a lack of elegance or ‘down-to-earth-ness’ with many of the residents in the area.

Yaletown has been virtually fully-developed. Aside from the odd lot still available to be developed or a few that are currently being developed as new luxury towers, the area was basically complete by the late 2000’s. Demand to buy or rent in the area is high, so the area will likely continue to be sought-after, robust to market fluctuations, and well-maintained.

Prices in Yaletown tend to be among the highest in Vancouver on a dollars-per-square-foot basis, second only to Coal Harbour. It is one of the most sought-after areas and one of the most robust micro-markets in Vancouver. This is because it is the most convenient and newest neighbourhood Downtown, so many residents and investors enjoy the ease of living in the area — as well as the safety of their investments.